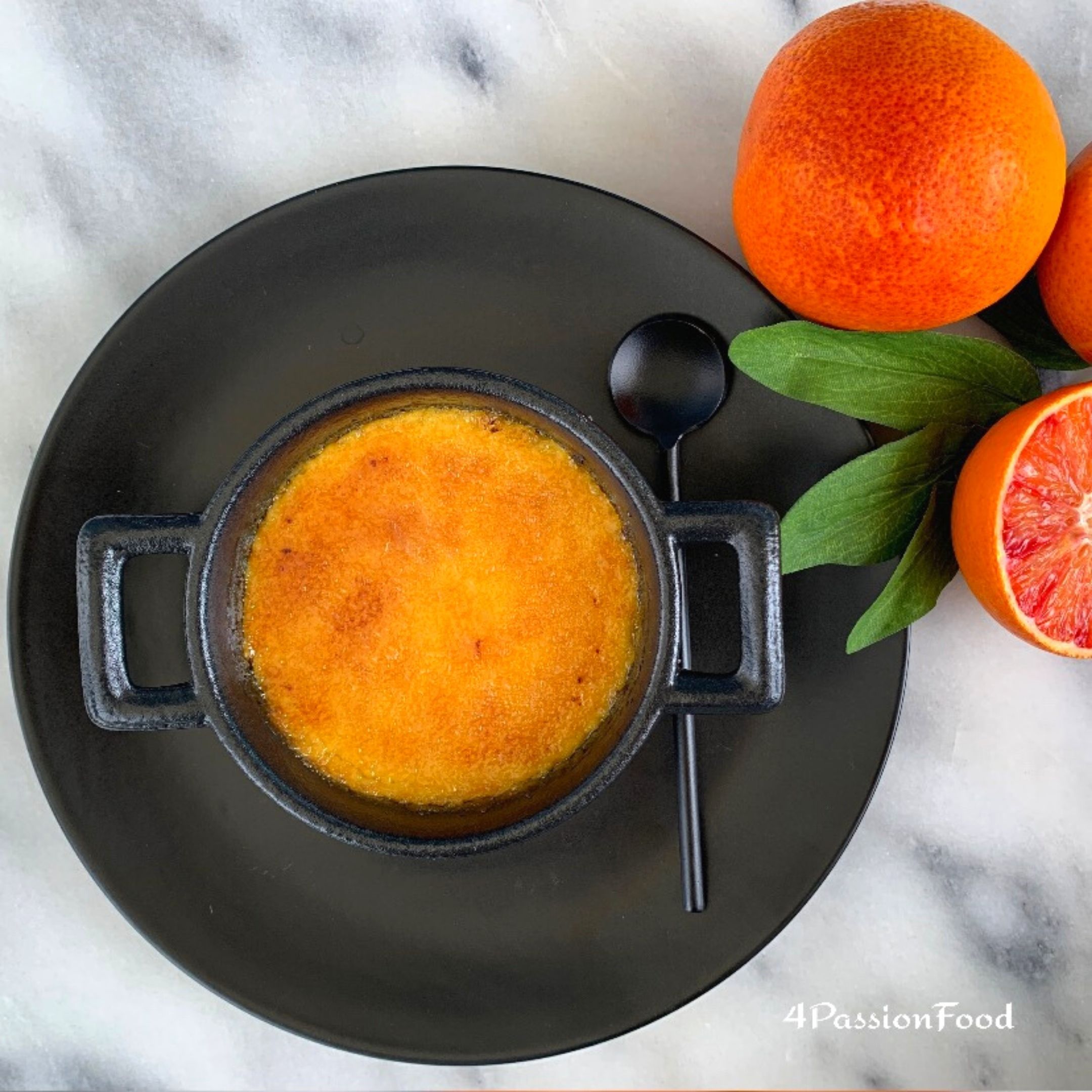 What a wonderful dessert !! A silky, rich crème brûlée with an amazing golden yellow color, flavoured with saffron and blood orange juice. It might not seem like an obvious partnership, but it works very well.

It’s mellowed by the creamy custard and rounded out by the sweetness of the layer of the caramelised sugar.

Very simple, very well balanced and very complex at the same time. And that for me was spectacular.

This recipe is from “Suqar” cookbook, it means sugar. One of my favorites sweet books.

What is crème  brûlée ?

It’s served slightly chilled, the heat from the caramelised process tends to warm the top of the custard, while leaving the center cool.

The custard is made from cream, egg yolks, sugar and traditionally flavoured with vanilla. It can have other flavouring (like the amazing recipe I’m sharing with you). Sometimes it’s garnished with fruits.

The caramelised sugar crust can be covered with a liqueur, and set fire which is very spectacular.

The history behind the « crème  brûlée »

The exact origin of crème  brûlée is uncertain. France, England and Spain all claim to be the country where this dessert had its origin.

The earliest known recipe for crème  brûlée appears in Francois Massialot’s 1691 cookbook « cuisinier royal et bourgeois » he was a cook at the Palace of  Versailles. That version was a sweet custard of egg yolks and milk with a burnt sugar crust. It’s similar to the modern version.

In 1740, Massialot referred to a similar recipe as « crème à l’angloise » which is « English cream ».

The name « burnt cream » was used the 1702 English translation.

A version of crème  brûlée (known locally as « trinity cream » or « Cambridge burnt cream »), was introduced at Trinity College, Cambridge in 1879.

The college crest was burnt into sugar on top of a custrad using a hot iron.

Crème brûlée was uncommon in French and English cookbooks of the nineteenth and twentieth centuries. It became extremely popular in the 1980s, a symbol of that decade’s self-indulgence and the darling of the restaurant boom, probably popularized by Sirio Maccioni at his New York restaurant Le Cirque.

He took his inspiration for the crème  brûlée from the Spanish dessert « crema catalana ». It dates at least as far back as medieval times. It’s also called : « crema de  Sant Josep ».

In Spain, this dessert is served on Saint Joseph’s day, on 19 march.

Sirio Maccioni claimed to have made it the most famous and by far the most popular dessert in restaurants from Paris to Peoria.

How to make a creamy crème  brûlée with its caramelised sugar crackle on top?

Crème brûlée seems like an easy, simple dessert to make, and requires just few ingredients. But there are some tips and tricks to have a silky, rich and creamy custard.

There are several ways to make the custard, and the basic one is to warm the cream or milk or both of them, and the vanilla bean (which is the basic flavour) in a saucepan. Meanwhile, in a bowl whisk the egg yolks (at room temperature) and the sugar instantly because the sugar can burn the eggs.

Chef « Anna Olson » noticed that adding a whole egg to the egg yolks helps to have a silkier texture and a lighter consistency.

Gradually pour the hot cream into the yolks, that what we call « tempering the eggs ». The process consists in bringing the temperature up so the eggs will mix smoothly into the cream. And for that, I advice you to use a ladle to slowly add the hot cream to the egg mixture while constantly whisking. It’s really important to do it slowly to prevent the eggs from curdling.

Strain the mixture, and voilà the custrad is ready to bake.

In this recipe, chef Greg Malouf cooks the egg mixture in a bain-marie until the sugar has dissolved, and adds onto it the mixture of saffron cream and blood orange previously heated. Then cooks the custard as a crème anglaise « English cream », before baking it for 45 minutes in hot water bath.

Time to bake the custard :

There are different techniques to cook the custard.

The most popular is the « bain marie » which is the hot water bath, it helps the custard to bake gently and evenly.

Some chefs like chef « Philippe Conticcini » advices to bake the crème brûlée at 90C. Which doesn’t require a water bath, because the baking is done at low temperature.

It should set around the edges but still has a slight wobble in the middle (it will firm up as it chill).

The cooking time may differ depending on the oven and the size of the ramekin dishes that you use.

One of my favorite chefs, chef “Christophe Michalak” had the idea to not bake the custard. He used the pectin to set the cream.

Just before serving, dust the surface of each custard with a thin and even layer of granulated sugar 1 teaspoon. Rotate the ramekin dish as you sprinkle to make sure that the sugar covers all the surface, if you leave any exposed custard, it will curdle with the heat coming from the blowtorch.

If you like a thicker toffee layer, return the custard to the fridge for 5 minutes, then dust with another 1 teaspoon of granulated sugar and torch again.

What if you don’t have a blowtorch ?

In this case, sit the custard under a very hot grill (broiler) until the sugar is golden brown and bubbling. 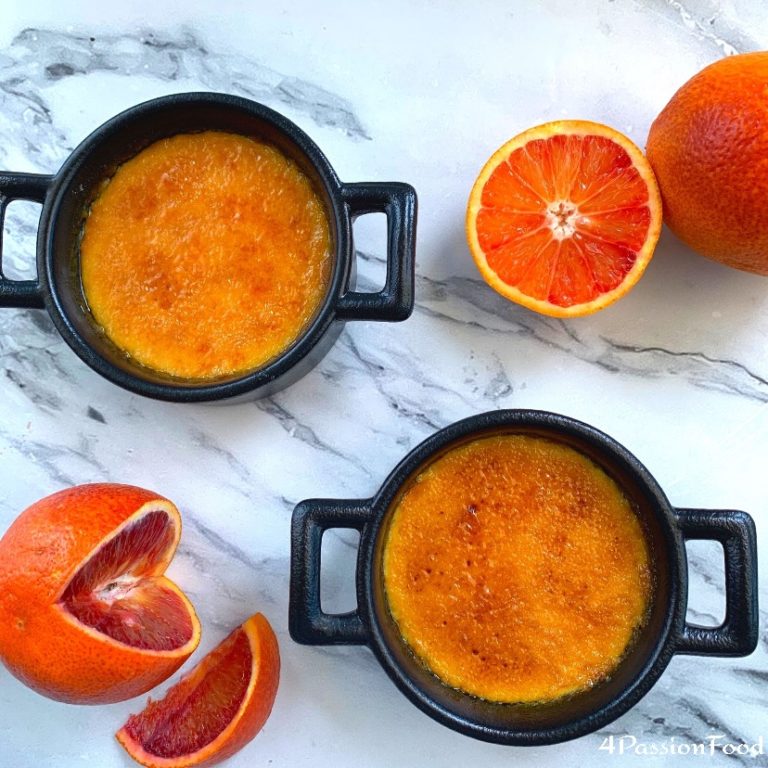 o   I infused my saffron in my cold cream for overnight.

o   If you notice the custard has any lumps or if you don’t like the orage zest, use a sieve and strain the custrad before baking.

o   If you don’t have a blowtorch, sit the custards under a very hot grill until the sugar is brown and bubbling.

o   If you have bubbles on the top of the surface that will prevent the sugar from browning evenly. So use a paper towel and touch the top of the creme where you see an air bubble. 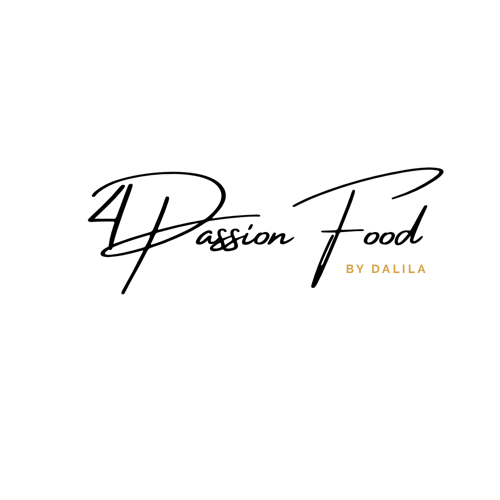